Home How to Write a Persuasive Essay

How to Write a Persuasive Essay

What Is a Persuasive Essay?

A persuasive essay is one where you choose a position and support it with evidence throughout the body of the essay. A persuasive essay has to be about a topic that you could strongly argue either for or against something. This can only be done when the topic is polemical. For example, you wouldn’t be able to argue for or against the statement “Humans need air to breathe.” But you could argue, “Humans need political structures in order to thrive.”

A good persuasive essay has a compelling introduction that draws the reader in, has a strong thesis statement that’s supported with solid evidence, addresses the opposing side’s arguments and concludes with questions or suggestions for further research or study.

Want to Save Time?We can write a persuasive paper for youBuy Persuasive Essay

A persuasive essay exists because a topic is polemical, meaning you could successfully argue for or against it. While the tendency is to choose to write about the side you agree with, that might not necessarily be the easiest to argue.

Example: if you wanted to choose the topic of the cause of global warming and you personally believe that it’s a natural planetary process, you might actually find more evidence to support that it’s caused by human activity, or vice versa.

Choosing a position should be based on your ability to find solid research to back it up.

Now that you’ve chosen your topic, it’s time to delve into your research. Read widely at first to find out what the popular themes of discussion are about this topic. Then start to narrow your research to include only credible sources (articles published in credible publications or blogs written by people with a background in the subject).

Step 3 - Narrowing Down Your Evidence

As you’ve performed your research, you may have come across many different topics that are interesting. But you won’t have time to explore all of them. Now is the time to choose which themes provide the strongest evidence and which are the most compelling. This doesn’t necessarily mean the most commonly argued themes. Throwing in a well-researched but rarely discussed position can earn you big points with your teacher.

Example: if you’re arguing that human activity causes global warming, a new study published on the topic that links cell phone use to global warming could be a fun and not-yet-widely-discussed argument to throw in.

An outline for a persuasive essay should look like this: 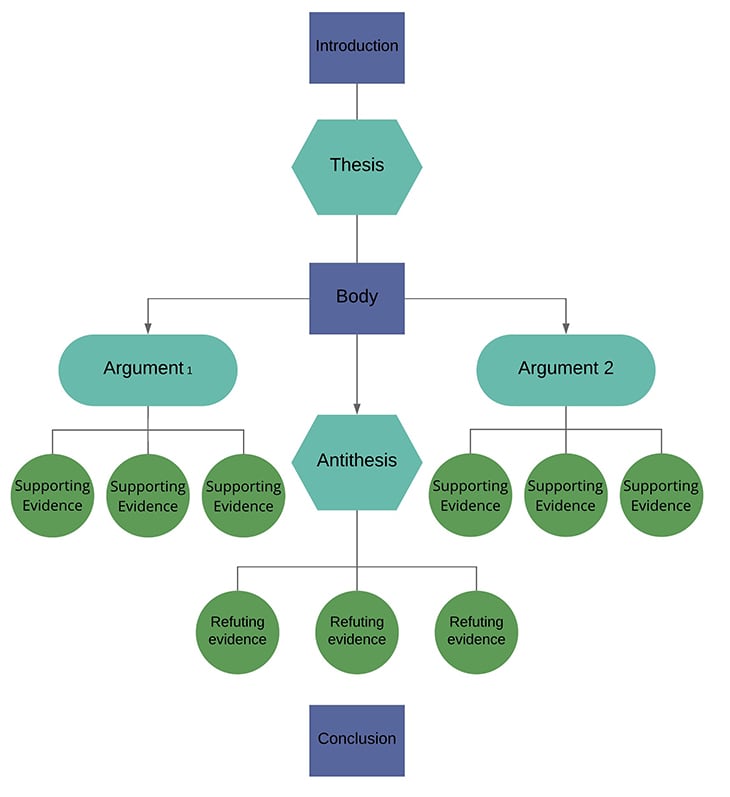 Example: “Too many kids use the internet without parent supervision” is a weak statement and doesn’t really show what you’re arguing. But, “Stricter parental supervision policies should be implemented on the internet” is a strong statement that gets to the heart of what your essay is going to be about and is easy to argue against.

Once you’ve written your outline and fleshed out an awesome thesis statement, you’re in the home stretch. Now all you have to do is fill in the blanks with the evidence you’ve collected during your research.

After you’ve finished your rough draft, you may be tempted to go to the beginning and start reading through it to edit it. Resist the temptation. Editing is most effective when you’ve had some time between the writing process and the editing process. It helps you spot flaws in logic, spelling and grammar errors and get a sense if the essay flows or not.

Now that you’ve left yourself some time since writing your first draft, you’re ready to edit. Don’t just read through it to see if it’s passable. Really look for where things can be improved. If you discover that a piece of evidence you presented doesn’t sound convincing but have another piece of evidence that would work better, don’t hesitate to make the change even if it means more work. The essay will sound better and the better grade will be worth it.

3 Tips on How to Write an Even Better Persuasive Essay:

Let professionals write your papers.
We hire only the best academic writers to our team. Learn more.

To get started, simply place an order and provide the details!

Toll Free (NA): 1-877-690-8926
Email: support@essaytigers.com
Company
About Us Our Story We’re Hiring Contacts Our Bloggers Blog
Client Area
Sign In Pricing FAQ Online Chat
Services
Write My Essay Buy Essays Academic Writing Service Business Writing Service Pay For Essay Custom Essays Essay Writing Help Do My Homework
Policies
Privacy and Cookies Terms Of Use
For Students
How to Write an Essay How to Write a Research Paper How to Write a Thesis How to Write a Case Study Useful Tools Writing Contest Infographics Referral Program
EssayTigers. All rights reserved. Copyright © 2023
Our services are intended for assistance purposes only.
We use cookies to provide you with the best experience we can. You agree to it by continuing to browse our website. Click for more.